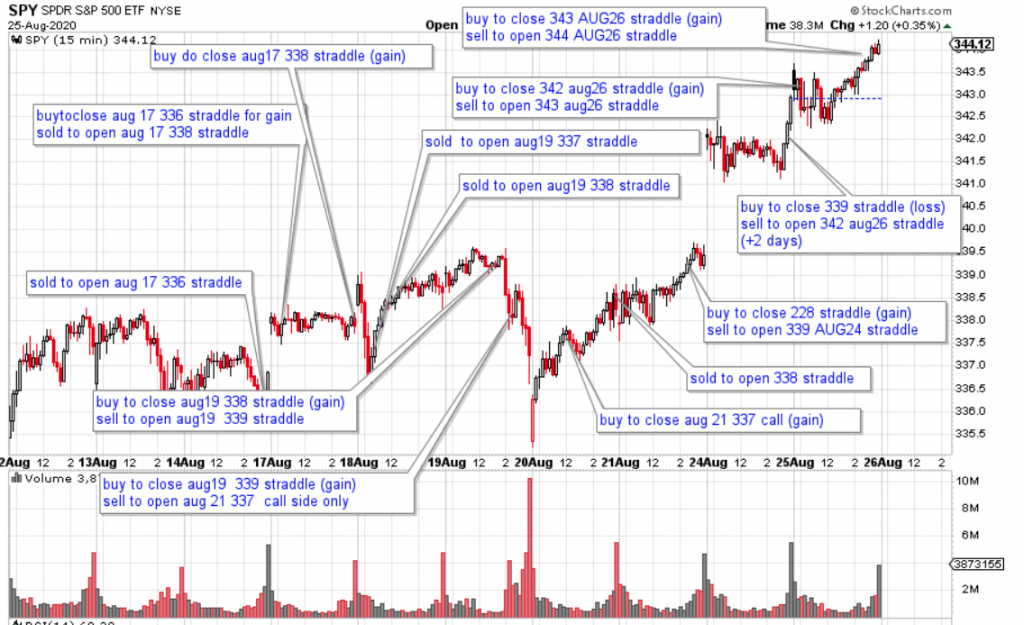 We knew we'd have to close this before end of day, to avoid assignment. This was done at 3:18 pm, netting us an additional $0.05/share on the call and $0.05/share on the put. This may not sound like much, but remember those results are in one day! If we did nothing better than that in one year we'd make over a 100% return.

Normally, I try to sell a new straddle the minute I've closed one. However in this case, I did not do so. I think it was because I was very unsure of the direction of SPY, and feared a big gap up or down.

August 19
Surely enough, the next day, the stock had moved lower. We closed that 339 straddle for a gain of $0.09/share. I probably got a sense of market direction, and decided to only short the calls. This worked out, and I collected $0.56 / share closing the position before the end of the day.

At that point, I thought the market had dropped too much, and a reversal would be in the works. So I decided to short an AUG21 337 in-the-money put, collecting $1.68 in premiums.

August 20
This almost worked against me, as the market gapped down to $335.50 on August 20th. However, I sensed the market had dropped too much for this time frame and a closure of the gap was likely. Had SPY dropped more I would have rolled this position and sold a call at $335. But the gods favored me and SPY recovered. So I was able to buy back my call at a profit of $0.58 by mid-afternoon.

It's important to put on your short straddles on a Friday, because you benefit by 2 days of free THETA decay. The only exception to this rule is if
you expect a huge economic event over the weekend which could propel markets to big moves. In that case any short positions would lose more in delta than they gained in theta decay.

August 24
On Monday, SPY gapped up by 2 points, not an overwhelming move for a weekend of events. My 339 short straddle was losing money, but I though the gap might close, and waited patiently. By 10:30 it was clear to me that SPY would not close the gap, so I took my lumps, losing $1.08 on the previous straddle. I chose to sell a 342 strike straddle but move date out to the 26th, as I did not want to have to necessarily roll again that same day to avoid exercise. This brought in $2.98 in new premiums.

SPY opened one point higher at 343.50, and my straddle was barely making any money. I decided to leg out of the 343 straddle to maximize income. I put on a series of about 4 trades, selling one side, then, when the market moved to the other directions - as I intended - selling the other side to maximize premiums. This can obviously also work against you if you read the tea leaves wrong. But I managed it well, adding about $0.20 cents of additional gains. By the end of the day I had rolled two more times, first to 343, than to 344.

So far so good. I've continued to add about $1000 of profits on my 16 contracts. Meanwhile, my long term contracts, are showing an extra $6000 or so of profits for the week.